Southwell’s origins are linked to water and roads. Early settlers probably arrived via the River Trent, the Fosse Way and the Great North Road, which are only a few miles away.  They discovered that the River Greet, which runs along the northern edge of the town, its subsidiary streams and four wells, provided a reliable supply of water. In medieval times the water was believed to have healing powers.  Today, as travellers approach, particularly from Thurgarton, they cannot fail to be captivated by the sight of Southwell Minster’s twin ‘pepper pots’ dominating this small town.  Weary pilgrims over hundreds of years must have felt even more impressed, if not overawed, by this magnificent place of worship which justifies Southwell being described as ‘The Jewel in Nottinghamshire’s Crown’. A view that is confirmed by the many Georgian buildings on the approach to the historic core of the town, culminating in the imposing ‘Prebendal Houses’ that overlook their mother church.  However, the recorded history of Southwell goes back to the Roman Empire.

Adjacent to the Minster is the site of an impressive Roman villa, probably the grandest in the area. Archaeological excavations have revealed the size of the villa, and further detailed work has shown the extent of the Roman site, including a monumental wall and a subsequent Saxon settlement. On display in the south quire of the Minster are the remains of the ceiling of the bath house, depicting Cupid or Hylas, and in the south transept are fragments of a Roman mosaic floor that can be inspected through a glass plate in one of the pews.  This may be from an earlier church as evidence suggests that the Minster was built around it.

An early Roman visitor to the town is said to be Paulinus, Archbishop of York, who dedicated his life to converting the north of England to Christianity.  In AD 625, on his journey north from Canterbury, he stopped in Southwell to baptise converts; the location is marked by a small monument to the ‘South Well’ on the road to Fiskerton.

Little is known of the following years until AD 956 when records show that Archbishop Oskytel was granted the manor, and the estate was doubled to around 20,000 acres after the Norman Conquest. Southwell became a convenient staging post on the archbishops’ journeys from York to Canterbury.  The building of the Minster commenced in 1108, with completion by 1300, and in the 1360s (altered in the 1500s) a large manor house, the Archbishop’s Palace, was built alongside this Norman collegiate church. Only parts of the palace have survived, but the extent of the house can be seen from the ruins of the remainder, which have been preserved with the help of Lottery funding.  The intact State Chamber has been renovated and is well worth a visit.  It is in use for functions and exhibitions.  By the side of the palace, and adjacent to the Archbishop’s deer park, an educational garden has been created and is a peaceful escape from the town.  Across the deer park, now used for recreational purposes, there are extensive views of the surrounding countryside.

Before it became a cathedral in 1884 the Minster was a collegiate church run by a chapter of canons, who derived their income from several communities within the Peculiar of Southwell. These villages are recorded in the names of the impressive prebendal houses along Church Street and Westgate.  For over a thousand years Southwell Minster’s chapter of canons was the administrative centre for a large part of Nottinghamshire. It was the religious body responsible for the running of the Minster and its estates on behalf of the archbishops of York who were the Lords of the Manor. In addition, the chapter also administered church courts, separate to the archbishop’s jurisdiction, which sat in various locations around Nottinghamshire so that local people did not have far to travel to attend the sessions. The chapter was responsible for granting marriage licences to, and proving the wills of, people who lived in 28 local rural parishes. The Peculiar also created employment for non-cleric professionals.  We know that in the 18th century successive County Coroners were appointed from the ranks of local attorneys (lawyers). Other attorneys acted as Registrars to the Minster Chapter, undertaking varying professional duties, until powers eventually passed to Southwell Rural District Council, which existed until 1974 when local government was passed to Newark and Sherwood District Council. 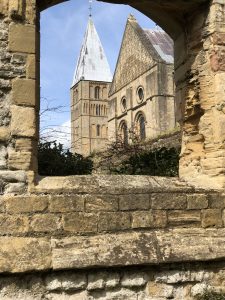 The Minster from the ruined Archbishop’s Palace

As well as assisting the chapter with administration, local lawyers had also been involved in administering the Leadenham – Mansfield and Southwell – Oxton Turnpike.  At the onset of the Industrial Revolution this was an important route for carting coal from Mansfield to the east coast ports. The demise of the turnpikes came with the building of canals and the development of the railways.

In recent years, the very active Southwell Community Archaeology Group has discovered evidence of a medieval settlement on the Burgage and investigations are ongoing.  This area of the town was the site of the former Nottinghamshire House of Correction.  It is reasonable to ask why Southwell should have the county’s House of Correction?  The answer lies in the former importance of Southwell as an administrative centre.

Nottinghamshire experienced many Civil War skirmishes due to the sieges of royalist Newark. Parliamentarian forces were billeted in the Minster and in the already decaying Palace, which was badly damaged.  One notable event during the conflict was the surrender of Charles I to the Scots at Kelham on 6th May 1646, having spent his last hours of freedom at Southwell’s historic Saracen’s Head Hotel.

In 1805 influential members of the town subscribed to the building of the Assembly Rooms.  This is where the middle classes met for dances, card playing, and other social activities.  When assemblies went out of vogue the building was incorporated into the Saracen’s Head Hotel. 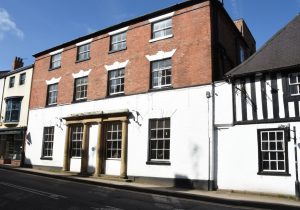 The Assembly Rooms, now part of the Saracen’s Head Hotel.

Southwell has not been noted for industry, other than agriculture, but there was an element of framework knitting, spinning and weaving from the late 17th century.  In common with the country as a whole, many people scratched a living from the land, however, by the 18th century the Enclosure Acts heralded the modernisation of farming with the growth of larger holdings.  One of these larger estates was centred on Norwood Park, farmed by the Sutton family on copyhold land belonging to the church. In the latter half of the 18th century it was owned by Sir Richard Sutton, a senior member of Lord North’s administration. During this period the estate was managed by a local steward, George Hodgkinson (and later his son), who recorded in his diaries that hops were grown.  The name lives on in Hopkiln Lane, off the Halam Road. As small tenant farming became unprofitable many left the land and joined new industries, with some moving to the coal mines of Nottinghamshire.

In the late 19th century, following the closure of the House of Correction, lace making came to the town, occupying the substantial buildings, and by the early 20th century Careys of Nottingham were the largest employers with 150 people, most of them highly skilled.  Many of the younger male employees were members of the local territorial army (1st/8th Battalion, Sherwood Foresters) and were early recruits to the trenches of the First World War, with as many as 60 serving their country.  Earlier, in the 18th and 19th centuries, some of the wealthy secular families, who had served the church in various capacities, built their own prestigious houses in the town in the areas of the Burgage, Burgage Lane and Westhorpe – mostly between 1780 and 1820.  At this time the town became a fashionable location and from 1803 to 1808 the young Lord Byron and his mother rented the newly built Burgage Manor.

Some of the families subscribed to the Assembly Rooms where they enjoyed formal dances and other genteel amusements, such as card games.  The building has subsequently been incorporated into the Saracen’s Head – a blue plaque on Westgate provides some detail.  One notable family that settled in Southwell was the Bechers, who had their roots in Ireland.  The most well-known member being the Revd John Thomas Becher (1770-1848).  He was Vicar-General of the Minster and a local Justice of the Peace.  Becher had influence over the design and running of the second House of Correction to be built in Southwell and also the building of the Workhouse, and was very much involved in influencing the drafting of the Poor Laws with the aim of reducing the cost of poor relief.  His great-grandson John, a lawyer, led the local territorial army company in the First World war and tragically lost his life as a result of wounds received in late 1915. Sadly, his son, also John, was killed serving in the RAF in 1940 and is buried in Aden.

Southwell’s lack of industrial growth meant that over many years the population only grew modestly, in 1801 it is recorded at 2,300 and for the first half of the 20th century it hovered around 3,500.  However, with the growth of motor car ownership, Southwell became a convenient place for commuting to Nottingham and Mansfield, creating a spurt of housing development, which continues, and the population of the town is now more than 7,200.  Today, with a choice of road and rail links, the town is home to people who commute to work in many towns and cities, including London. Young families are attracted to Southwell by its good schools, especially the Minster School that has its roots in the town’s early history. Southwell is still a relatively ‘genteel’ place and very much a tourist attraction.

If you would like to find out more about the history of Southwell you may wish to purchase:

A Brief Guide to the History of Southwell, Edited by J Michael Wilkinson and published in 2017 – see Publications.