Chance discoveries of mosaic pavements in the 18th and 19th centuries showed that a substantial Roman complex lay to the east of the Minster, beneath Vicars’ Court and the Residence and their gardens.

Consequently when it was proposed in the late 1950s that the new Minster School be constructed in this location, the Ministry of Works proposed that excavations should be carried out. 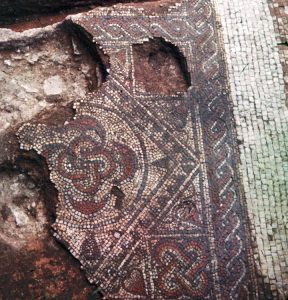 One of the mosaic pavements in the south wing.

These excavations, led by Charles Daniels, took place in the summer of 1959. They revealed parts of the Southern and eastern wings of what seemed to be a major villa, constructed around a courtyard. The eastern wing included a substantial bath building of which the cold plunge bath was uncovered. The small section of the south wing that was excavated contained six rooms all decorated with mosaic pavements.

A number of burials that post-dated the villa were found above the mosaics, while Anglo Saxon pottery also indicated post-Roman occupation on the site. 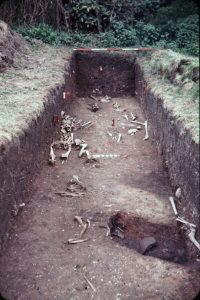 Burials above the mosaics in the south wing.

One of the most exciting discoveries from Charles Daniels’ excavations was the remains of the rich decoration of the bath-house. Painted wall plaster was found face down in the bottom of the plunge bath. It depicted a vibrant marine scene with a fish, fronds of seaweed and a Cupid wearing a cloak. The decoration would have covered both walls and ceiling and would have been reflected in the water, enhancing the enjoyment of the bathers. 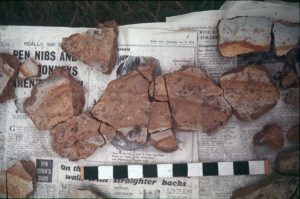 Some of the plaster at the moment of discovery on the Daily Mail of May 13th 1959.

The principal restored section of plaster is displayed on the wall of the Minster today, but two further intriguing panels of painted decoration were also restored. One shows further elements of the marine scene, including what seems to be a prawn, while the second shows two naked figures standing arm in arm. They seem to be male and female (although it has also been suggested that they are both male). The figure depicted on the right-hand side of the panel is carrying a club and may be Hercules, with the female figure depicting Hebe, Hercules’ bride on Mount Olympus.

This type of wall decoration is quite well known from villa bath-houses in Roman Britain, such as Sparsholt in Hampshire and Lullingstone in Kent. They are also known from elsewhere in the Roman Empire. The City Baths at Herculaneum has a marine scene on the roof of the frigidarium or cold room. 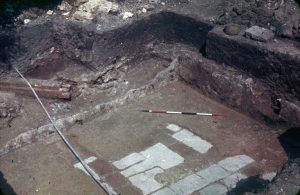 The bottom of the plunge bath with plater still lying on it (visible as a dark grey spread of material).

The presence of the Cupid is unusual and the depiction of a Cupid wearing a cloak in a marine scene is unique. Norman Davey (who restored the Southwell paintings) has suggested the Cupid was actually shown swimming on his back and that he is currently displayed the wrong way up, although other scholars disagree! There is no doubt, however, that these were wall paintings of very high quality. 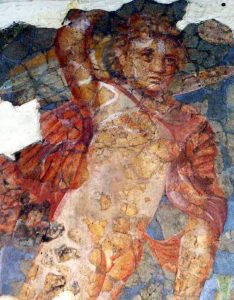 Text and pictures by the kind permission of the University of Nottingham. 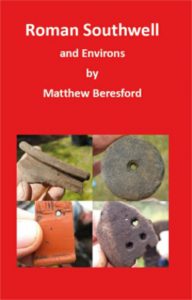