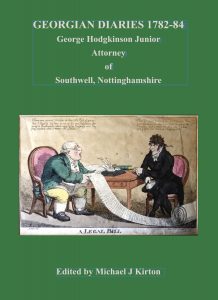 The book provides us with an insight into life in Southwell in the latter quarter of the C18th.  George Hodgkinson Junior worked with his father, also George, in their thriving business as country attorneys.  He provides us with details of his business and family life and his business trips to other parts of the country, including London.  Here is a note of the background to the introduction of the Hodgkinson to Southwell:

They offer an interesting insight into middle-class life in Southwell during the last quarter of the 18th Century.  A time when, assuming you had good health, life was quite fulfilling.  The Hodgkinsons were country attorneys who were able to mix with the great and the good of Southwell and its surrounds.

The Hodgkinsons  first came to our notice in the late 1980s when the late Philip Lyth and Bob Hardstaff, founder members of this society, published an interesting book entitled: Georgian Southwell. It was based on the Day Books of George Hodgkinson Senior for 1770 and 1771 and the Journal of his son, George Junior, of 1781.  In 2000 Bob Hardstaff published a full transcript of the 1781 Journal, together with a short commentary as an introduction. A few years later I discovered further Journals for 1780 and 1782-84, hidden away in the archives of Reading University.  They had been left to the university by Sir Frank Stenton – a descendent of the well-known Southwell family.  Ten years ago, we published the transcript of the 1780 Journal and at long last here are the final three Journals.

During the first part of the 1780s George Junior completed his apprenticeship, first with his father and a final year with the London attorney Rogers Jortin who ran a busy practice.  George soon learnt that Jortin demanded a high standard of work.  During the period of the diaries George Junior was up and down to London servicing their many clients.  The principal ones being the Archbishop of York and Sir Richard Sutton of Norwood, who was a senior member of the government and a wealthy man.  George Senior was the Steward of his Southwell estate and looked after his estates at Brant Broughton and Great Cotes near Grimsby.  Hodgkinson Senior was also the Registrar to the Peculiar of Southwell and County Coroner.

The diaries give us a good insight into the personal and business lives of this important middle-class family, in addition we are also treated to a view of the life of a young professional in London – lots of eating out and visits to the theatre, the names of many of the establishments live on.  We are treated to a note of young George’s swearing in as an attorney and a few days later as a solicitor.  I have also managed to find the apprenticeship papers of George Senior, which has solved a long outstanding mystery as to how he found himself in Southwell

As a lengthy introduction to the diaries, I have expanded on some of the themes and put them into context – hunting shooting and fishing; travel; assemblies; banking; social climbing and so on.